Rich Orloff is one of the most popular unknown playwrights in the country.  His plays have received thousands of productions, numerous awards, and oodles of laughter.  From his acclaimed comedic explorations of such topics as disability (FUNNY AS A CRUTCH) and an unwanted pregnancy (ENGAGEMENT RULES) to documentary-style plays such as VIETNAM 101: THE WAR ON CAMPUS and CHATTING WITH THE TEA PARTY, Rich’s plays range widely in style and subject matter, but they all combine irreverence and compassion.

Over the last few years, Rich’s theatrical writing has expanded to new forms.  He has performed his autobiographical monologue IT’S A BEAUTIFUL WOUND at both theaters and conferences around the country.  BLESSINGS FROM THE PANDEMIC, a performance piece, has been performed over Zoom by both theaters and schools, and was published by TRW Plays.  ESTHER IN THE SPOTLIGHT, his first musical comedy, premiered at Romemu in New York City in 2022.

Author of over a dozen one-acts and 80 short plays, Rich’s short works have had over 2000 productions on six of the seven continents… and a staged reading in Antarctica!

Rich’s short comedies have been published seven times in the annual Best American Short Plays series and four times in the annual Best Ten-Minute Plays anthology.  They’ve also been included in the bilingual collection An Anthology of Contemporary American Plays (published in China), in The Bedford Guide to Literature, and in anthologies published by Random House and Western Michigan University Press.  Playscripts has published eight volumes of his short plays. (For details, visit Playscripts.com.)

Before becoming a playwright, Rich wrote for newspapers, magazines, radio, TV, industrial films and educational videos.  While in Kosovo in 2000, Rich wrote the children’s play SNOW WHITE AND THE SEVEN DWARFS FIGHT TUBERCULOSIS for Doctors of the World.

Born and raised in Chicago, and a graduate of Oberlin College in Ohio, Rich currently lives in New York City.  He likes to get out of town frequently to remind himself what the rest of the world is like. 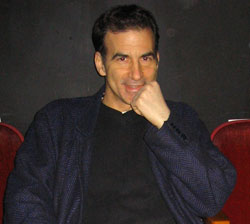